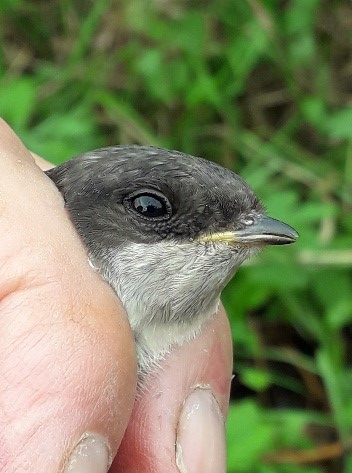 The electric fence, to protect the netting area from cattle, was re-instated yesterday, and was still standing when operations started this morning. Weather-wise, the conditions could not have been better, slightly overcast and with the gentlest of breezes. Whilst the nets were being erected it was noted that there was virtually no bird sound. So, despite the perfect conditions, it was no surprise that catching was very slow.

If it hadn’t been for the arrival of good numbers of migrating Swallows and House Martins, some of which descended low enough to be caught, the catch would have been well below the average of 57. As it was the catch, with the hirundines, was slightly above average at 63. Of the regular birds, Whitethroat was top of the list with nine caught, followed by Bullfinches with six. 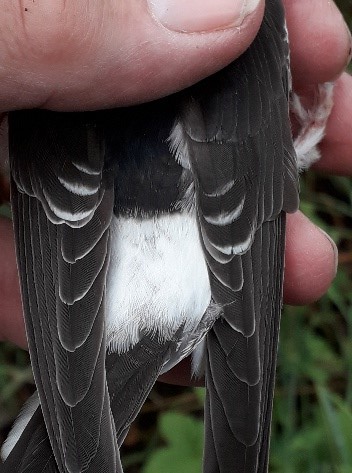 Of the 63 birds caught, only five were adults, four of which were in post-breeding moult, while one had completed its moult. All the hirundines were birds of the year which had completed their rapid, short, and incomplete post-juvenile moult, which will be finished when they reach their winter quarters. Young Swallows look like adults, but with much subdued colours, especially the throat which is rusty rather than red. House Martin juveniles on the other hand look quite different from the adults. Their plumage is more the colour of Sand Martins, as the blue tinge to the black feathers is not developed until post-juvenile plumage. When the birds are in the hand, and the rump (which is white) and the underparts are not readily visible, then the head alone could easily be mistaken for a Sand Martin.

During the morning the cattle paid us a visit, and the effectiveness of a fully operational electric fence was demonstrated, when the herd tried to walk through the hedge where the nets are, only for the leading cows to touch the fence and jump back; this in turn caused confusion for the cows behind which ran off. Question now is, do the others learn from the ones in front? Or do they all have to touch the fence at some time to know what it does?

One of the interesting things for me at this time of year is seeing young birds at different stages of post-juvenile (PJ) moult. A multi-brooded species like the Robin, can have young ranging from birds still completely in juvenile plumage, up to birds of the year that have completed their PJ moult and look exactly like adults. It’s also interesting to see the difference in the speed at which PJ moult happens. Long distance migrants like Swallows have a rapid and incomplete PJ moult; Chiffchaffs and Willow Warblers have a partial PJ moult of all their body feathers (but not flight feathers) which takes a few weeks; Wrens which have a similar strategy, stay in juvenile plumage a long time, then have a rapid moult; and Long-tailed Tits have a complete moult so are indistinguishable from adults by September.

Not all birds are healthy, and sometimes individuals are caught which cannot be ringed. Bullfinches and Chaffinches sometimes have mite infestations that cause their legs to develop growths. Such was the case with one of the adult Bullfinches caught today. In this male bird, the infestation has made the legs and claws grow unevenly and bigger.