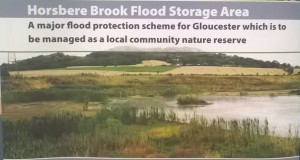 Mike Smart and Andrew Bluett both as representatives of GNS and as “Friends of Horsebere” attended the 2015 awards meeting of the Campaign to Protect Rural England at Gambier-Parry Hall, Highnam on Wednesday 7th October.

Each year the Campaign to Protect Rural England Gloucestershire Branch selects a variety of projects against a set of criteria (Well considered buildings; Innovative use of natural resources; and Projects developed by and for the local community) and presents them with awards under the overall slogan “Change is inevitable, it should be for the better”

Amongst the judges for the CPRE are Anna Jones, president of GNS.

However, the award of most interest to GNS and those interested in Birds and Odonata was that given to Horsebere Brook Flood Alleviation facility on the outskirts of Gloucester with a plaque being presented to Brian Smith, Toby Willis and Anthony Perry of the Environment Agency and a certificate to Felicity Davies-Birks of Gloucester City Council.

Horsebere was created by the movement of 120,000 tonnes of earth and subsoil, redistributed across the site to create a holding pit, thereby buffering the floodwaters potentially arising from the Horsebere Brook that in 2007 was so devastating for some of the residents of Longlevens.

The by-product of this project was the creation of meadow, woodland and wetland with public access pathways that has already become a haven for birds, Dragon & Damselflies and other wildlife. The management of the site as a public access and wildlife site has been taken over by Gloucester City Council, primarily through the Ranger, Felicity and her assistant, Ian Elphick, who have plans for further enhancement with trees to be planted, fencing installed, management grazing to take place, information boards and other improvements in the pipeline.

The habitat created has been particularly good for birds with large numbers of Gulls visiting to roost and bathe, passing waders, Herons, Egrets, Swans, Ducks, Geese, Coots and Moorhens, flocks of finches, Wagtails, dozens of Dragonflies and Damselflies, a visiting Otter and the Kingfishers that use the brook for both feeding and breeding and as a highway to and from the River Severn.

In the past few weeks, several GNS members including Mike Smart, Andrew Bluett and Martin Greenish have been part of a working party that has removed a large number of pioneer Willows from the bed of the flood alleviation area.

More working parties are planned, if you would like to become involved and be a “Friend of Horsebere”, contact Felicity at [email protected] (or Andrew Bluett / Mike Smart at GNS).