Derek & Chris Foster were joined by Mike Smart, Tiz Butler, Pam Jones, Daphne Lane and Andrew Bluett on a field trip following the Blue Rock Trail (more properly known as the Soudley Valley Rural Geology trail) from Soudley towards Ruspidge (Cinderford). This was to be a field meeting of general interest but based on the geological trail that follows the old railway line towards Cinderford for the first half of its length before looping back over the Eastern United colliery spoil heaps on the edge of Staple Edge Wood and back down into Soudley Village.

It was bright, sunny and relatively warm day so that even deep in the valley the temperature was quite comfortable. The party met in the car park of the Soudley Village Hall and walked up onto the road and through the village to Upper Soudley where the trail commences by taking to the former railway track to Cinderford running parallel to and above the Soudley Brook. At the beginning of the trail and information board gives and outline of the geological interest which consists of a base of up to 400 million year old Old Red Sandstone, overlaid successively by Quartz Conglomerate, Tintern Sandstone, Limestone Shale, Lower Dolomite, Crease Limestone, Whitehead Limestone, Drybrook Sandstone and above that, the coal measures.

Chris Foster explained various points of interest and gave some background to the geology and quarrying activities, methods and uses of the materials extracted. Each of the strata are visible along the way, especially so in the Old Quarry, Blue Rock Quarry and Shakemantle Quarry. The party also found a large slab of Limestone containing traces of Crinoidal fossils in the Blue Rock Quarry. The last quarry to operate was the Shakemantle Quarry from which limestone was extracted and crushed down to provide aggregate for the manufacture of Danygraig Concrete Commons (bricks) as recently as the late 1980s.

As the party gathered a Green Woodpecker flew overhead and Stock Dove called from the woodland; bird life was plentiful with another Green Woodpecker, Crossbills, Magpie, Carrion Crow, House Sparrows, Blue, Coal, Great and Long Tailed Tits, Chaffinch, Robin, Wood Pigeon, Goldcrest, Wren, Raven, Nuthatch and Buzzard, the special highlights were a male Goshawk circling overhead at the beginning of the trail proper and a male Peregrine further along. A solitary butterfly appeared, large and dark against the light so that it was not possible to be 100% sure but was thought to be a Peacock.

For anyone interested in following the trail, a guide is available from Gloucestershire Geology Trust or from the nearby Dean Heritage Centre. The Dean Heritage Centre is worth visiting in its own right and has a delightful café serving a variety of food and drinks. 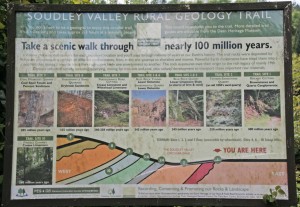 The party at the “Hod Boy” sculpture. Hod Boys were literally boys, small and young, who dragged hods or drams full of coal from the coal face to the main shaft through some of the very low (2ft or less) working tunnels.

Blue Rock Quarry – site of limestone quarrying and a place where crinoidal fossils can be seen. Hollows cut in the rock face were filled with timber which was then burnt to heat up and crack the rock to facilitate extraction 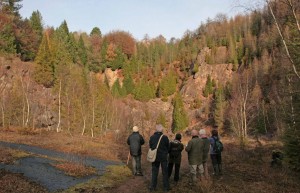 Shakemantle Quarry – now being reclaimed by nature, was the site of the Danygraig Brick manufactory until the 1980s.