As a result of member’s requests, Andrew Bluett led a further two meetings in search of Nightjar in the Forest of Dean, nine members and guests attended on 3rd followed by another five on the 10th July.

Meeting at 8.45 for 9.00pm, each walk set off as the sun was setting and in both cases the Nightjar activity began somewhat falteringly after 9.30 but soon became more positive and interesting as the darkness gathered. On the 3rd, the party met by chance with Lewis Thompson, locally renowned birder and photographer who was prospecting the area for an RSPB organised evening with Nightjars due to take place on the following Sunday evening.

Birds were heard churring to begin with, followed by some flight activity; at least two birds were churring on both occasions, often together and in competition with one another, occasionally close together, often some distance apart. They were inclined to move around and take up song posts at various points around the area, returning to the most favoured several times. Flights included pairs together, some display and courtship and on the 3rd, one pair were seen to mate after the female took to a perch, the male joined her on another perch, then flew up to and mounted her in full view of the observers. Mark Kitchen was fortunate enough to capture this behaviour on video, perhaps uniquely.

During the display flights in particular, the birds were calling with the soft chirping sound and males were clapping the wings high and forward over the back of the body. Even in the darkness the birds were easily visible, sometimes aided with one or more torches which enabled the observers to see the white wing flashes of the male birds and the enormous eyes which reflected the light (like cat’s-eyes in the road) at considerable distances.

On both visits several Wild Boar were seen prospecting and feeding amongst the scrub and bracken, including one particularly fearless and closely approaching “weaner”, still with a stripey body; a Fox was noted on the 10th, bats were flying around on both occasions and on the walk back to the cars, some dozens of Toads and Frogs were seen on the forest track ranging from perhaps 10mm up to 75mm in length, along with a small Palmate Newt seen on the 10th.

A single Woodcock put in a brief and grudging appearance and a young Tawny Owl was heard making contact calls.

The photographs below are not of great quality but are stills, captured from video clips taken in near darkness and illustrate some aspects of the flights seen.

Display flight, wing clapping with the wings high and forward over the body 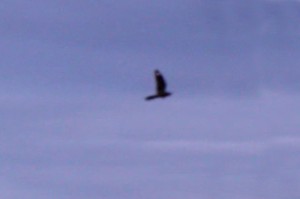 Male chasing female, his tail fanned and held low behind the body 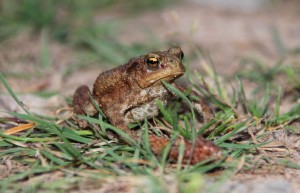