The Severn has risen sharply in the last couple of days, preventing both the Chelt and Leadon from discharging into the Severn and leading them to back flood. The water has also risen at Ashleworth/Hasfield, but Walmore has not yet flooded.

Ashleworth this morning: 7 Bewick’s Swans were on floodwater on the Hasfield side, A family part of five (two adults and three cygnets) flew in, no doubt from Slimbridge, at 10.15am; couldn’t get close enough to see bill patterns or whether they were ringed. This is actually the first record of Bewick’s on day trips to Ashleworth since February 2008, as there were none at all last winter. Also two Shelducks and a squealing Water Rail.

At Walmore: no Bewick’s, no floodwater; 70 Teal, 3 Shelducks, one Water Rail actually seen.

As a follow-up to the observations and pictures of up to 30 Buzzards feeding on earthworms in a field near Berkeley on the Gloster Birder website for 1 October, today near Deerhurst there were at least 41 Buzzards on the ground, no doubt looking for earthworms in a newly sprouting field. Also about 40 Lapwings and 20 Black-headed Gulls with them.

The number of waterbirds has decreased sharply as the remaining floodwater ices over.

Coombe Hill is almost completely iced up. There is an ice sheet between the canal bank and Grundon Hide which is still not safely accessible. There was a small group of birds round a small hole in the ice: 20 Mute Swans, 15 Canada Geese, 10 Teal, 5 Wigeon, 10 Mallard. 2 Water Rails squealing. A flock of 7 Golden Plovers flew south. No sign of the Whooper Swan; one was reported at Pirton Pool in Worcs. yesterday and it seems likely this was the bird that was at Coombe Hill last week.

At Ashleworth, there was a much larger area of open water in the ice and more waterbirds: 12 Mute Swans, 51 Canada Geese, 500 Wigeon, 290 Teal, 40 Pintail, 101 Shoveler, 117 Mallard, 2 Gadwall. 15 Snipe on surrounding fields and a male Sparrowhawk hunting along hedges.

The water level has dropped right down and most of the grassland and shallow water is frozen, but some ditches still had open water. Sharp decrease in birds, most had no doubt withdrawn to the estuary.

No Mute Swans, only 4 Mallard and 50 Teal, three Snipe and a rather bedraggled female Stonechat. Eight swans flew over at 12.30pm going northeast, almost certainly Bewick’s; they circled but didn’t land and I couldn’t see where they went.

The Severn continues to drop. As usual, the Severn Hams are best on a dropping flood. Leigh/Cobney Meadows is almost free of floodwater, Coombe Hill is still flooded and the hides still inaccessible, but should soon become accessible without waders. At Ashleworth, water levels have dropped considerably and the hides are easily accessible. Extensive ice cover at both Coombe Hill and Ashleworth meant that the diving ducks had departed, but surface-feeding ducks sat round open pools in the ice, offering opportunities for good counts.

At Coombe Hill Meadows this afternoon were: an adult Whooper Swan, the Pink-footed Goose, 12 Shelduck and well over 3000 other duck, mainly Wigeon and Teal, but also 200 Pintail and smaller numbers of Gadwall, Mallard and Shoveler. Also two Ruff, a Kingfisher and male Blackcap. See Andy’s pictures below. 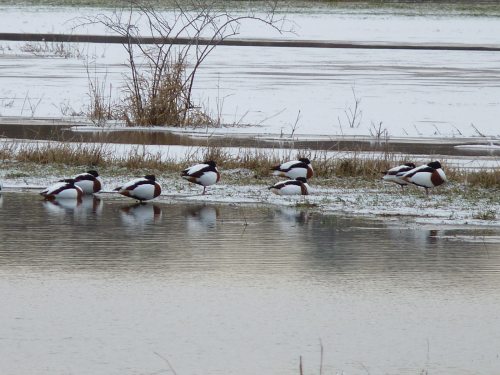 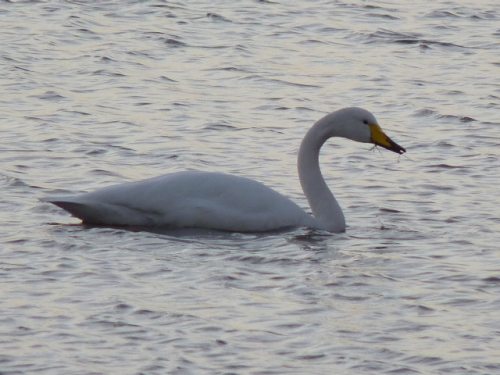 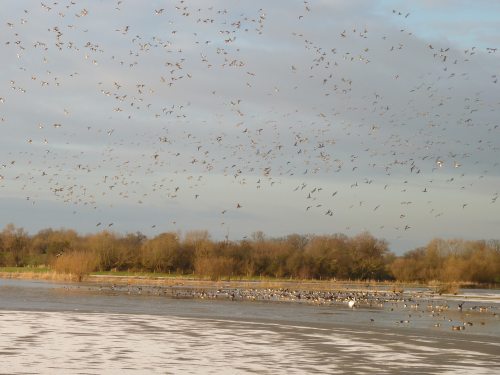 The floodwater continues to drop, but the hides are still inaccessible. However, excellent views of the spectacle are available from the towpath.

At the western (Wainlodes) end, the big flock of Lapwings (800 today) that has been moving back and forth between Ashleworth and Coombe Hill around the edges of the floodwater for the last few days was joined by two Redshanks and three Ruff, plus lots of gulls and crows.

From the eastern end (Wharf) still about 3000 duck (around 2600 Wigeon and 100 Pintail), nearly 1000 geese (including the immature Pinkfoot and an adult Bar-headed Goose), 125 Lapwings plus a Dunlin and a Little Stint. One adult Whooper Swan on the floodwater, definitely unringed. Still 60 Pochard and 45 Tufted, but couldn’t find the Goldeneye today. Water Rail very vocal again.

The hides at Coombe Hill are still not accessible because of floodwater, but good views can be obtained from the canal towpath.

Conditions today were perfect as the dropping flood is now very shallow, allowing birds to feed comfortably, presumably on seeds and material deposited by floods. Good numbers of ducks especially Wigeon, which presumably have moved in from the estuary and lots of Canada and Greylag Geese which have moved back after dispersal during high flooding. Go and have a look before the floods drop further and the birds return to the estuary.

So the best spectacle of the winter so far and, at last, a single adult Whooper Swan (perhaps the one seen earlier in the season at Slimbridge then in Herefordshire); 9 Mutes (including 3AY with mate and their three cygnets – they nested on the canal this summer); about 570 Canada, 1 Barnacle and 190 Greylag Geese, 6 Shelducks, 2500 Wigeon, 200+ Teal (probably lots more but they hide and are difficult to count), 30 Gadwall, 94 Pintail, 40 Shoveler; even some diving ducks – 47 Tufted, 58 Pochard and a Goldeneye to boot. Two Peregrines flying round. 58 Coot (! – a huge number for the time of the year) at least one Water Rail doing it’s little pig squeal. 30 Lapwings. At least one, maybe two, Chiffchaffs plus Bullfinches and lots of Long–tailed Tits along the towpath.

Numbers at Ashleworth much smaller with a total of about 300 surface feeding ducks and another 270 Canada Geese; two Treecreepers feeding in the hedge opposite the hide.

Two Chiffchaffs at Lydney Harbour today. Another Chiffchaff and a Barn Owl (flushed from thick ivy) along the Stockwell Brook at Aylburton.

The light was so good today that it was possible to identify the food items of the 2 Great Northern Divers on pit 125 as mainly American Signal Crayfish.

Now 3 Little Egrets feeding by the River Churn north of the village, up from just 1 on 29 November.

A female Blackcap spent about 10 minutes pecking away at Mahonia japonica flowers in a garden at Christchurch, Cheltenham, presumably going for small insects visiting for nectar.

A Red Admiral butterfly was seen flying in the afternoon sunshine among trees at Aldsworth today.

There was a queen Buff-tailed Bumblebee flying around outside the Black Horse in Cranham village today, perhaps responding to the fairly mild conditions?

The overnight rain has caused water levels on the meadows at both Ashleworth and Walmore to rise again, as it can’t get out to the river.

At Walmore this morning, the five Bewick’s seen yesterday were already present at 08.30am; it is not clear whether they had roosted or flown in from Slimbridge. As yesterday there was a group of three yellownebs, all adults, associating with one another as though they were a family group; two were ringed: one was TUV (“Widemouth”), black letters on a white ring on the left leg, the other BCH, black letters on a white ring reading up on the right leg. This pair have been regular visitors to Walmore for several years, often accompanied by their offspring from previous years; the third unringed bird was presumably one of their offspring from a previous year, though it looked to be an adult rather than a yearling. The three yellownebs at first kept away from the two others, both black nebs, behaving as though they were pairedy. But then all five joined forces at the edge of the water. One of the blacknebs was ringed, again a white ring with black letters on the left leg, reading up. I could only definitely read the top letter which was Z; it may have been TPZ or TSZ.

The Severn continues to drop (down half a metre overnight to 8.95m at Haw Bridge today), but is still too high for any water to be discharged from the meadows. At Ashleworth, the two outfalls from the meadows to the river had absolutely no outflow and at the Severn Bore at Minsterworth there was no sign of any water flowing out either from the ditches that drain Walmore Common.

At Walmore today: 5 Bewick’s Swans, all adults, feeding in shallow water by putting their heads under the water and pulling up vegetation, presumably grass; strange they do this when they don’t seem to like the wet grass when the floods drop. The five appeared to be a pair, both with black nebs, one with a white ring on the left leg; and a group of three yellow nebs, one ringed white left, one white right, one unringed. It was impossible to read the rings as they were far off in deepish water. I would suggest that they had flown in from Slimbridge this morning, as they weren’t seen at Walmore yesterday, so are unlikely to have roosted even though conditions are suitable. In addition to the Bewick’s, duck numbers were pretty much as yesterday: 6 Shelducks, 44 Pintail, 170 Wigeon, 300 Teal, 100 Mallard, 20 Gadwall, 50+ Shoveler. About 100 Lapwings, at least 3 Ravens.

Les Brown took another look at Longdon Marsh (just in Worcs.) and found only 25 Mallard remaining, the other ducks having disappeared, probably back to Coombe Hill, where an estimated 750 could be seen on the water from afar and Ashleworth where there were also about 750. There is a massive flock of 1050 Lapwings at Ashleworth, round the edge of the flood, such numbers have become unusual in recent years, as they all seem to rush off to Slimbridge.

The Severn is beginning to drop (the level is down to 9.45m at Haw Bridge) but is not yet low enough for water to discharge from the flooded meadows, where the water levels are still increasing slightly. So the Coombe Hill hides remain inaccessible, though the hides at Ashleworth are still perfectly accessible from the Ham Road.

With such high water levels in Gloucestershire, it seems that many of the Ashleworth/Coombe Hill ducks have moved to Longdon Marsh, just in Worcestershire, where Les Brown fond about 1,000 surface feeding ducks on Wednesday.

At The Mythe, Tewkesbury today, a Treecreeper singing already! Over the Severn Ham at Tewkesbury a Peregrine, making directly for the abbey.

At Walmore around 11.45 am, the flooding was still extensive and there were about 700 ducks present: 6 Shelducks, 100 Wigeon, 300 Teal, 100 Mallard, 25 Gadwall, 150 Shoveler, 50 Pintail, also 200 Lapwings and 30 Canada Geese and a single adult Bewick’s Swan; it was sleeping on the earth banks left when the ditches were cleaned out, not feeding, looking pretty tired, soperhaps it had recently arrived.

A Barn Owl was between Elmbridge and Barnwod over the ‘waste’ ground just NE of the Wall’s factory in the early hours (just after midnight).

The Pomarine Skua was still present this morning and looked very bedraggled, although it is still doing the occasional fly round. Also seen were 13 Redshank and 2 Rock Pipits.