This pair of Dor Beetles (Geotrupes sp.) was seen today at at Burnt Oak near New Fancy View. 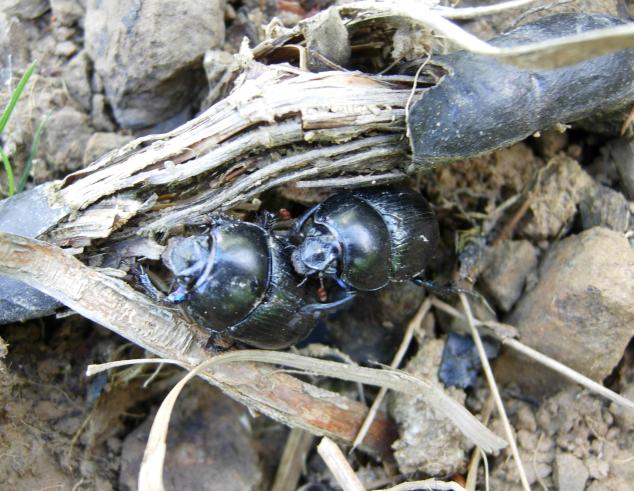 There were two Black-tailed Godwits at the Ham this evening.

Never believe a weather forecast that you want to be right is the moral of this story! A sheet and light mothing session on the hill should have been over by the time the rain came through, but it arrived just after we were set up and the evening became something of an extreme mothing event: 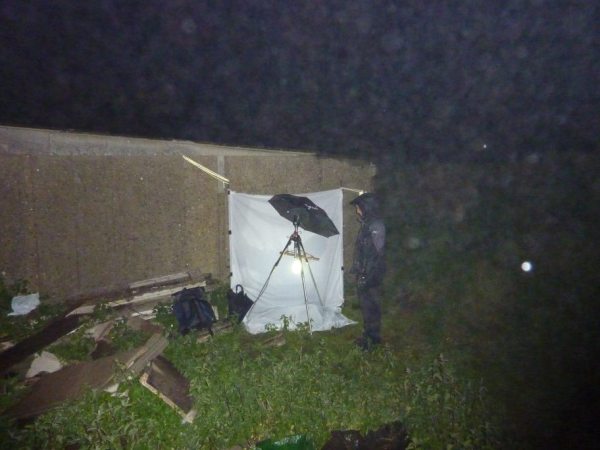 However, weather not liked by humans proved to be fine with the lepidoptera and the highlights of the evening were 3 Light Feathered Rustics:

This species has an interesting national distribution pattern which is almost a map of limestone and chalk in southern England. See http://www.mothscount.org/maps/94/moth_distribution_maps.html?filter=L&species=NHMSYS0000501177

Coombe Hill and Ashleworth (25 May 2010, contributed by Mike Smart and Les Brown)

At Coombe Hill things remains quiet. It looks as though the fine weather in April and May has allowed migrant birds, especially waders, to move straight through without forcing them to make stopovers. Today, the pair of Oystercatchers was still present, the female apparently incubating on the island in the northern scrape. About 12 Lapwings were present, after a total absence in the early part of the breeding season; some seemed to be incubating while others showed only a very weak attachment to their nests. A single very nervous Redshank which behaved as though it had failed elsewhere and was moving through. Two or three Shelducks defending territories, as though they had females on eggs hidden away somewhere. A single Little Egret, a single Sparrowhawk, one male Teal in the Long Pool; the pair of Mute Swans has nested again (very late) at the usual nesting site by the Wharf, after trying and failing further down the canal. One Redstart singing behind the Long Pool, at least five singing Whitethroats, at least three Sedge Warblers and two Reed Warblers singing in the withies. There are extensive stands of Ragged Robin in the usual field and evidence everywhere that the Dock Leaf Beetles (Gastrophysa viridula) are continuing to prey on docks.

Ashleworth was quiet too. At least three Redstarts singing along Stank Lane. It appears that there is only one pair of breeding Curlew in the area. The same species of beetle were busy there among the docks too.

A Grey Seal moved slowly upriver on the incoming tide at 4pm. Also present were ten Ringed Plovers and a male Yellow Wagtail.

Standish (5 May 2010, contributed by Juliet Bailey)

The first St Mark’s Fly was around today. This is a species that is supposed to appear on 25 April (St Mark’s Day), so we are running about 10 days late. Also, the Swifts are about, I saw my first over Ebley yesterday, and over my garden today. A Hobby has also returned to the area.

Along the Severn between Lower Lode and Chaceley Stock and in the fields inland of the river were: a pair of Egyptian Geese that were displaying on the river bank; at least 1 and perhaps 2 Lesser Spotted Woodpeckers drumming and singing; 1 Raven; 1 Kingfisher; 3 Lapwings, with at least two chicks; 1 Common Sandpiper; 1 Redstart singing at the Chaceley GWT reserve. At Maisemore Court, at least one pair of Canada Geese with small goslings.