Further evidence of the effects of the floods on the timing of the flowering of plants – the lower branches of a Guelder-rose (Viburnum opulus) which had been submerged in the summer floods, were in full flower today, contrasting with the upper branches which had many large clusters of bright red berries.

A female Stonechat and a Wheatear were present early morning.

1 Greenshank still present and a continuing steady passage of Swallows and House Martins (several hundred of each) all day, with a few Meadow Pipits. Please note: the Long Pool Hide is now open again, as the floor which had floated up during the floods is now back in place.

The geese are still roosting – 130 Canada Geese flew off to the south west and 90 Greylags separately to north east; 4 Little Grebes, 50 Shoveler, 30 Teal, 1 Pochard, a male Peregrine perched on a tree, 1 Water Rail at close range from the Grundon Hide, 10 Snipe and 1 Greenshank. There was a constant southwest passage all morning of Meadow Pipits and Swallows (probably a couple of hundred of each) with much smaller numbers of Skylarks; three Chiffchaffs singing, and a few Reed Buntings.

GWT volunteers are clearing dead vegetation along the towpath and pioneer willows from the islands in the scrapes, repairing the Long Pool hide and cutting vegetation in front of Grundon Hide to improve the views from the hide.

Ashleworth: for the last week Meadow Pipit passage has been very heavy, and good numbers have been caught for ringing, using a recorded song tape to attract them to the nets. On 17 September 60 were caught (and at least 200 were estimated present) and on 22 September another 58 were caught, out of several hundred passing through. Of the nearly 200 pipits caught so far every single one has been a juvenile (eggs laid this year), presumably on their way to wintering grounds in Iberia. On 22 September, a male Merlin was chasing the pipits which are frequent prey species for Merlin and nearly entangled itself in the nets. Also caught on 22 September, a late juvenile Redstart and a late juvenile Sedge Warbler, plus about 14 Reed Buntings. This was encouraging, given that this species fared badly in the floods, though these birds had probably come in from outside the immediate area. Also seen: two Wheatears, one Green Sandpiper, 15 Snipe and the two Hobbies, one of them still very noisy.

Coombe Hill: good numbers of geese are roosting but you have to get there very early to see them: on 20 September, 240 Canada Geese, 1 Barnacle and 80 Greylags left before 07.00am; also 50 Shoveler and 50 Teal.

On an otherwise quiet day, a Little Egret was on the marsh at Sudmeadow for 5 minutes just before 2.00pm then flew off towards the river in a westerly direction.

An albino Swallow flew over my garden at 8.30am, low but purposefully and not the zigzag feeding flight. It was on its own and flying at about 20ft, heading south west. It appeared off-white, maybe white with a hint of magnolia and I saw it for about 20 seconds before it was obscured by hedges.

A Little Egret was pushed off the river by tide and flew over Sudmeadow towards Castle Meads at about 10.27am

A far from complete survey of the trees along the Honeybourne Cyclepath between Malvern Road and the Prince of Wales Stadium produced counts of 51 adults and 115 larvae and pupae of Harlequin Ladybirds (Harmonia axyridis). In the sunshine on the afternoon of 11th the larvae were very active and all of the insects seen were found mainly on Sycamore leaves, especially where these were coated with honeydew from aphids. There was a wide range of colour forms of this highly variable ladybird present and some of these are shown below. The 18-spot form, shown in the top 2 pictures below, was by far the most common form. Also seen were the mines of Cameraria ohridella, the Horse Chestnut Leafminer, on Sycamore which is a foodplant that has also been recorded in other areas where the moth has reached very high numbers. Finally, a Blackcap was is full song near the Stadium on the 11th, and typically of mid-September, Chiffchaffs were singing on both mornings. 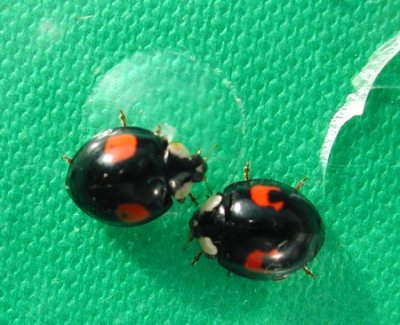 The Whinchat was still present this afternoon just below the Lower Parting. Also a Kingfisher at Llantony Weir.

During the afternoon there was a Little Egret along the river. A Whinchat by the Parting and 5 Green Sandpipers on the marsh.

A Kingfisher flew low over the garden at high speed this morning.

2 Green Sandpipers again this morning in the marsh. Among the birds trapped for ringing were a Lesser Whitethroat and a young male Reed Bunting.

Coombe Hill this morning: the Spotted Crake was still showing nicely on the bank and swimming but only until about 08:00 after which it went to ground. Also 2 Little Grebes, 1 Pintail, 14 Shoveler, 2 Green Sandpiper, 1 Common Sandpiper, but still no sign of any Skylarks, 5 very definite Pied, not White, Wagtails.

Ashleworth: at least two and probably three Hobbies, still very noisy and very obvious round the pylon at south end of reserve.