2 Red-rumped Swallows with a large passage of other hirudines seen late afternoon/early evening.

The bluebell display in Randwick Woods (Grid ref SO8307) is quite outstanding and well worth driving down the narrow lane from Bird in Hand to Randwick! There is also a reasonable display, with wood anemone, at the far end of Maitland Wood (Grid ref SO839089).

An immature Marsh Harrier flew NE at Plusterwine at 1130 this morning. At Guscar were 3 Oystercatchers, 3 Ringed Plover, 5 Dunlin, 3 Whimbrel, 2 Yellow Wagtails and a Wheatear. A drake Common Scoter was seen from Etloe as it drifted downstream on the ebb tide.

A good day for warblers though not for waders. A total of 5 Whitethroats between the Wharf and the Meadows reserve. 2 Sedge Warblers along the same section. A Lesser Whitethraot at the Wharf. Also – 6 Mute Swans, including the breeding pair, 4 Canada Geese, 2 Shelducks, 6 Lapwings, 2 Redshank, a Cuckoo heard. At the Wharf the breeding pair of Coots have 2 young.

A Speckled Wood in Swindon Lane.

Grasshopper Warbler at Longney Point reed bed. A Cuckoo over the fields by the river. Still only one Sedge Warbler, but a good day for Tortoiseshell and Peacock butterflies.

Tony Taylor, the ants, bees and wasps recorder, attempts to teach me bumble bees. Today in my garden we saw five of the six common species – Bombus hortorum, Bombus pratorum, Bombus terrestris, Bombus pascuorum, Bombus lapidarius. All but one were queens, and they were feeding on red and white dead nettle, pear, cherry and berberis blossom. They were not interested in the early umbellifers (alexanders and sweet cicely) which are covered in flies, nor the dandelions or daisies. Tony says there is a good chance of seeing these in any garden in the county at this time of year, plus Bombus lucorum, the other common one. There is also plenty Anthophora plumipes, a flower-bee, which looks extremely like a bumble bee to me, except a bit whizzier perhaps. This is nesting in the very soft lime mortar of my brick-built house. You can hear the buzzing as it excavates its holes.

P.S. Tony Taylor was here again on 22 April and saw Bombus lucorum – so basically I have the full set of common bumbles in the garden.

2 Common Whitethroats and a Sedge Warbler at Coombe Hill this evening. A surprising Goosander flying over the junction with the A38. The usual Lapwing, Curlew and Redshank also present. A quick look at Ashleworth was disappointing, with just a male Redstart of note. Earlier there was another Redstart near Walmore and an amazing total of 28 Ravens, presumably non-breeding (first-year?) birds.

A Whitethroat plus 15 Sand Martins and 8 House Martins.

A Cuckoo seen and heard this morning at Longney Point; last seen flying over the river.

Several flowering heads of Alexanders (Smyrnium olusatrum) in a roadside ditch by the B4213 east of the junction with the minor road to Deerhurst. This is a plant more usually found in coastal locations, but has a long association with this area and is noted in both the Flora (1948) and the Supplement (1984).

Several Orange-tip butterflies at both places this morning.

A Barn Owl bird hunting along the road between Over roundabout and Maisemore village at about 11.15 pm.

Good Friday Grass (Luzula campestris) is in full bloom on my front lawn, just as it should be for Easter. It looks huge in the picture below, but is actually only about three inches high. Its proper English name is Field Wood-rush and like all the wood-rushes, it has hairy grass-like leaves. (It is not really a grass at all). There is not much it can be confused with at this time of year, and it is very common on unimproved grassland in Gloucsetershire. In Warwickshire, where I worked, it was often called Sweep’s Brushes. 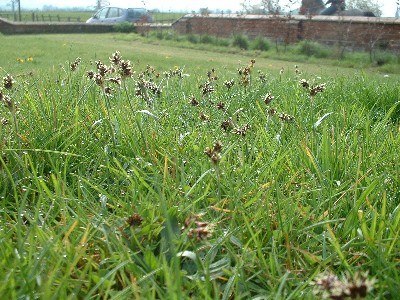 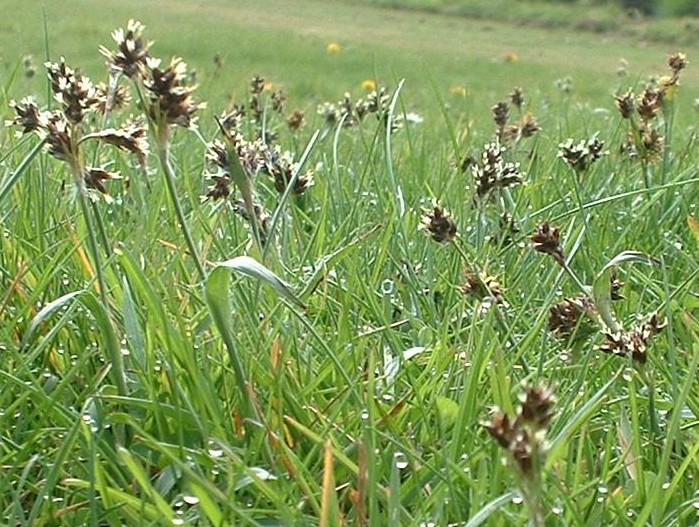 Waders in the Severn and Avon Vales above Gloucester (Easter 2004, contributed by Mike Smart)

At this time of year, some species of wader are seeking out breeding areas in the Severn and Avon vales. They are ground-nesting birds and very sensitive to disturbance, especially by dog-walkers, so people will understand if exact locaities are not always given. If you are in an area where waders area nesting, please keep well away so as to let them nest in peace!
Other waders are on passage, en route to breeding areas much further north.

Oystercatcher: Oystercatchers have only just appeared as a breeding species in the Severn and Avon Vale (though they have been nesting at Slimbridge for some years now). A pair has nested for a couple of years now at Bredon’s Hardwick Pits in Worcestershire, just a few hundred yards north of the county boundary, and they often wander into Gloucestershire. On 12 April, one bird clearly had eggs already and could be seen incubating on one of the islands in the pits, with its mate on guard nearby.

Lapwing: Nesting Lapwings have become very few and far between in the Severn Vale in the last few years, and don’t seem to like greenfield sites, preferring rough ground or arable. On one field in the vale, under set-aside regime, I saw 13 Lapwings on 9 April; one had a nest with four eggs, the others didn’t seem to have laid yet, but will no doubt do so soon. At another site, there were three birds doing their familiar and lovely display flight.

Little Ringed Plover: A pair were displaying at one site on 10 April.

Snipe: April is a month when Snipe come through Gloucestershire on passage, presumably from wintering areas in Ireland, so there are always a few about. But some stay to breed and do their characteristic drumming flight. The breeding birds have become few and far between in recent years; no drumming recorded yet, but it’s worth listening out, especially at dusk or just after dark in marshy areas.

Curlew: The sight and sound of Curlews doing their display flight and song over the hay meadows of the Vale is one of the most wonderful sites in the county. The birds have been in many hay meadows since early March, and can still be found in a number of places. As yet, they probably don’t have eggs, because they are large birds and have to wait for the grass to grow up, to hide them from predators like foxes. So they usually just sit around in pairs, feeding; in the evening they seem to gather in groups to roost, forgetting to be territorial; on 11 April there were eight in shallow water (safe from foxes) at Ashleworth. Any observations of other evening gatherings elsewhere would be of great interest.

Redshank: Another ground-nesting wader that has decreased alarmingly in our area in recent years. There are still a couple of places in the Vale where they nest though and their magical song can be heard. On 12 April, I watched one bird in a meadow; it ws obviously excited, bobbing its head nervously, sticking up its neck, and running around in nervous excitement; I wondered if it already had eggs and wanted to get back to incubate them, so wqatched it from afar with my telescope; it went to look at a number of tussocks, disappearing from view for a while, then reappearing; it had at least one bird, presumably its mate, in attendance, and at one stage there were three sitting round the tussock it was investigating. I realised that in fact, it was prospecting for a nesting place; and found this was true when I investigated the tussock where it had spent such a long time; it had created a round depression, freshly flattened but there were no eggs as yet. So clearly, the grass may not be long enough for Curlews just yet, but is about the right length for Redshanks.

Golden Plover: Golden Plover winter in Gloucestershire, on the Cotswolds and in the Severn Vale, and in recent years good numbers have been seen at Slimbridge. They breed much further north of us, on moorlands and high ground in the North of England and Scotland. On 26 March, near Twyning, I heard a call which I first thought was a displaying Redshank in the distance, then took for a distant Song Thrush, until I realised that it was coming from overhead. I looked up and saw a group of about 200 Golden Plover, circling slowly, giving not their usual rather monotonous flight call, but doing little excerpts from their display call; they were obviously excited migrants on their way through, looking for somewhere to rest; they went round and round and finally landed in a ploughed field nearby, when I could see that about 10% of them were of the southern form, in summer plumage, with black belly and throat and golden speckled plumage above. Really a quite unexpected and magic moment; birds that have wintered in south west England must come through the Severn and Avon Vale every year, but often pass unnoticed.

Common Sandpiper: A small sandpiper which winters in the Mediterranean and south of the Sahara and comes to us in summer. One on the Avon near Twyning on 8 April.

Green Sandpiper: A few winter in Gloucestershire, usually on fast running streams, but most go further south. One stream they like is the River Chelt, but they were few and far between last winter. One on the Chelt on 9 April, I don’t know if it was one which had wintered and escaped being seen, or one which had wintered much further south and had dropped in on route to breeding areas in Scandinavia.

Jack Snipe: Still two or three, as there have been for much of the winter, at Coombe Hill in late March and early April.

Some other migrants: A male Wheatear in full plumage by the Chelt on 9 April. Chiffchaffs singing everywhere now, (one singing hesitantly near Ashleworth as early as 19 February had probably wintered); they have been around since mid-March, it seems the males arrive first and sing to attract the females when they arrive. The first Willow Warblers I heard were on 9 April, Swallows on 8 April.

A Willow Warbler singing at Postlip and 3 Swallows near the Golf Club house.

At least 5 Skylarks in display/song over the common – another sign of spring!

A female Black Redstart at West Down this evening and six Ring Ouzels on Cleeve Hill.

Now 14 Bramblings, including 4 males moulting in to summer plumage, in Swindon Lane.

The Speech House area today produced a male Redstart, male Firecrest, two Willow Warblers, c.20 Brambling (Arboretum Feeder) and two Hawfinches.
Also, a total of about 68 Kittiwakes in two flocks off Lydney Harbour this evening, plus a House Martin and 10 Swallows nearby at Lydney Marsh.

2 males Bramblings feeding with other finches in a garden in Swindon Lane.