Ingrid Twissell, the county Dragonfly recorder led a walk on Saturday 10th August at Woorgreens in the Forest of Dean. Ingrid was joined by her husband, Colin, recently retired Amphibian and Reptile recorder, Tony & Tiz Butler and Andrew Bluett.

The key location was the clear felled area to the west of Woorgreens Lake where rough grassland has developed and a number of small scrape ponds and drainage channels have been created, forming an ideal habitat for a number of Dragonfly and Damselfly species, 20 have been recorded to date.

Nine species were noted on this visit, Emperor, Common Darter, Common Hawker, Four Spotted Chaser, Common Blue, Azure, Blue Tailed and Emerald Damselflies. The highlight of the morning was a male Black Darter. Several of these species were seen to be mating and/or laying eggs. The cool morning with patches of sunshine and shade were ideal, keeping the insects active but not so much that they could not be seen easily.

Bird life was good for this time of year; Raven & Carrion Crow, Tree Pipit, Pied Wagtail, Siskin, Great Spotted Woodpecker, two Willow Warblers singing, Reed Bunting, Buzzards (adults and calling young), House Martin & Swallow hawking for insects. 20 Crossbills were feeding and flying to and fro, mainly around the Larches to the west and a solitary Green Sandpiper flew from one of the scrapes. 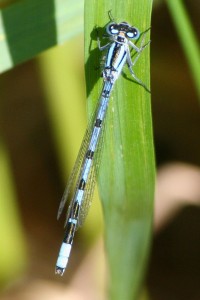 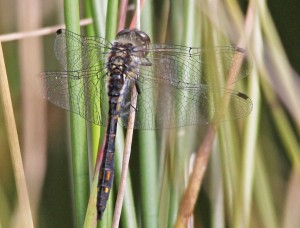