Nine GNS members joined Andrew Bluett for a summer walk in the Forest of Dean on Saturday morning, the 27th July.

The hoped for Wild Boar did not appear, it seems the hot dry weather of late has driven them to the cooler depths of the forest although there was some evidence of their having been foraging amongst the trees possibly as recently as the night before.

The party walked across to the avenue from the Kensley Lodge car park to view the stained glass “Cathedral Window” suspended on a timber frame between the fir trees, a spectacular visual representation of the forest and part of the Sculpture Trail. Along the way a speculative turning over of a section of tree trunk by Colin Twissell led to the discovery of a female Great Crested Newt (Triturus cristatus). Meanwhile, along the path there were several young Common Toads (Bufo bufo; 10mm long) to be seen wandering here and there together with a number of Dor Beetles (Geotrupes stercorarius).

At Kensley lagoon there were Dragonflies and Damsel Flies to be seen, including several Sympetra and a bright blue Emperor Dragonfly (Anax imperator). Further up the track towards Crabtree Hill a Golden Ringed Dragonfly (Cordulegaster boltonii) appeared overhead. On the way down to Woorgreens the party came across Richard Baatsen, the county bird recorder searching for the Keeled Skimmer (Orthetrun coerulescens) that has been reported from the area recently.

On the way back to the car park at the corner of Woorgreens Lake the attention of the party was drawn to the mass of yellow flowering plants covering parts of the banks of the pool, Juliet Bailey took a sample and later identified it as Marsh St John’s-wort (Hypericum elodes). 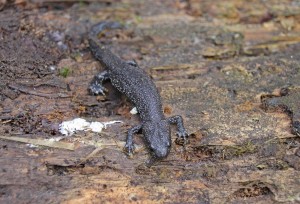