Seen today – a Curlew on territory and two Crossbills flying over.

2 Hornet Moths were seen today by the River Severn. This follows a single moth on the 28th at the same location and another seen in Woodmancote by David Iliff on the 24th. These are the first records of the moth since 1946. 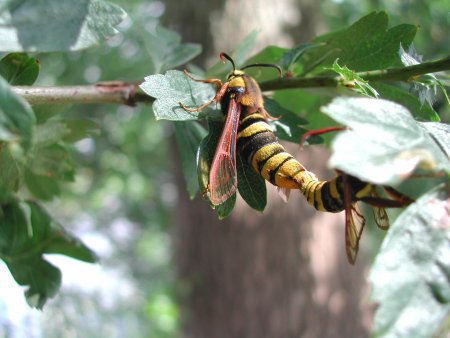 The theme of passage waders continues; yesterday at Coombe Hill, a summer plumaged Dunlin and a Little Ringed Plover, neither of which have been seen there for several weeks and must be on return passage; also seven Lapwings and at least two Green Sandpipers. There was also a Little Egret.

Not forgetting extensive stands of Canary Reed Grass Phalaris arundinacea, presumably the legacy of last year’s summer flood, and some stands of True Fox Sedge Carex vulpina, the rare plant for which the site is famed.

Yesterday at Ashleworth, things were quite interesting: Quail still singing early morning and late evening ( as they have been for most of June). There are nesting Curlew present, but in addition, small groups of birds (which have presumably failed at sites further upriver) are flying straight over, very high, calling, presumably en route for the estuary. In the evening there were eight non-breeding Curlews (a large number for the site and time of year) feeding on a newly cut hayfield.

Today, Quail calling both morning and evening. During a ringing session, good to average numbers of Redstarts, Whitethroats. Lesser Whitethroats, Reed Buntings, Reed Warblers were caught, but numbers of Sedge Warblers are drastically down – no doubt an effect of the floods of last year.

On the Severn above Haw Bridge this evening, more signs of autumn passage of waders: a Common Sandpiper on the river (also a Kingfisher and two local broods of Canada Goose); on the cut hay meadows, at least 15 Lapwings, undoubtedly migrants.

Downriver movements of waders are clearly under way already, now we have passed the summer solstice: Green Sandpiper and Redshank last Saturday, Curlew yesterday, Lapwing and Common Sandpiper today; only small numbers, but the return migrations is clearly in full swing; interesting to see whether these birds are noted when they arrive on the estuary.

In general it was rather quiet: Canada Goose with five ducklings, two Common Terns on the island in the scrape, chasing crows and gulls; two Little Egrets; Cuckoos very active – still singing and four all at once chasing one another; signs of autumn passage already on midsummer’s day: first two Redshanks for quite a long time and four Green Sandpipers, undoubtedly waders on return passage.

Now is a good moment to go out looking for wild flowers – orchids on the Cotswold commons, foxgloves in the Dean, and buttercup meadows in the Vale. The picture below is of a fine display of foxgloves on Chase End Hill. 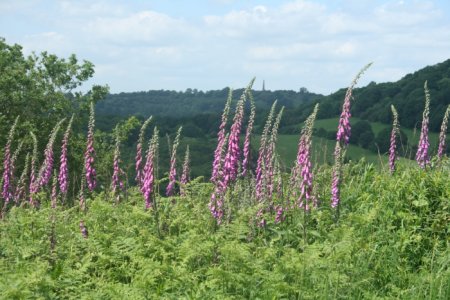