Castlemeads (31 May, contributed by Gordon Avery)

There were 2 Little Egrets on Castlemeads in the afternoon at 3.45, viewable from the Severn Way at Sudmeadow.

Castlemeads (30 May, contributed by Gordon Avery)

Sudmeadow (24 May, contributed by Gordon Avery)

A Kingfisher flew through during an otherwise uneventful ringing session.

Guscar and Aylburton (21 May, contributed by Mike Smart)

On the morning high tide it was rather quiet with not much by way of a high tide wader roost: 5 Little Egrets; 2 Hobbies flew upriver very high; 20 Shelducks; 4 Oystercatchers; 1 Dunlin; 3 singing Reed Warblers in the reeds in ditches; 2 Yellow Wagtails.

Coombe Hill, Tirley and Staunton (20 May, contributed by Mike Smart and Les Brown)

A quiet day at Coombe Hill: 25 Coot, some with young; at least 50 Swift hawking insects, no doubt migrants; two Redstarts singing and one Reed Warbler in song. At Tirley Lake six Barnacle Geese. At Staunton a Yellow Wagtail in a grass field.

A first summer Little Gull this morning at the reservoir.

A Hobby over the weir at 4.30pm, heading towards the docks.

A singing male Reed Bunting on the Plantation Pool. A pair of Tufted Duck on the GLS pond plus a pair of Mute Swans nearby but not nesting. Up to 15 Sand Martin nestholes on the Minsterworth Ham side towards the Rea with birds still excavating right under the top of the bank. A single Common Sandpiper on the river at Port Ham.

Severn Hams (7 May, contributed by Mike Smart and Les Brown)

At Coombe Hill this morning there was no sign of the Wood Sandpiper. There was one Little Ringed Plover, at least six Redstarts singing along the canal between The Wharf and Wainlodes. Several Sedge Warblers and Whitethroats in full song with many of latter doing song flights.

On the evening high tide there were 16 Whimbrel, 2 Bar-tailed Godwits, about 20 Ringed Plover, 60 Dunlin; one Wheatear and three or four Yellow Wagtails.

Sudmeadow (6 May, contributed by Gordon Avery)

At Staunton: a female Yellow Wagtail looking as though it was going to nest in a cereal field, also two Ravens.

At Ashleworth at 1.00pm, a Hobby chasing insects.

At Coombe Hill in the evening it was fairly quiet, until it got dark when everything started getting lively. 1 Little Grebe, 2 Shelducks, 3 Little Ringed Plovers, 6 Dunlin in summer plumage (flushed by a hare), two or three Curlews coming in to roost when it was nearly dark, with a vast repertory of variations on the bubbling call and at least one Whimbrel after dark.

A Harbour Porpoise has coming up the Severn on the high tides. It was seen this morning for ten minutes off Fretherne shore around 0930 hrs, on the rapidly falling tide. A little later it was seen off the Dumbels and Mid Point.

The first session of Constant Effort ringing. Lots of birdsong early on: two Cuckoos, at least six Redstarts, at least eight or ten Sedge Warblers, two or three Whitethroats, two Blackcaps, four or five Willow Warblers, rather few Chiffchaffs, at least half a dozen Reed Buntings, but by eight or nine o’clock the volume had decreased considerably. Birds caught included seven Sedge Warblers (including three birds originally ringed in 2004 and 2005), a Garden Warbler (infrequent at Ashleworth), three Whitethroats, a Lesser Whitethroat (even though none were singing), only one Reed Bunting. Other birds seen included: seven Barnacle Geese (flew over), one Greenshank, one Hobby (chasing insects at midday) and two Ravens.

Cheltenham (2 May, contributed by Ian Ralphs)

Flowering plants of Purple Toothwort (Lathraea clandestina) were found scattered along the banks of the Hatherley Brook, immediately downstream of Robert Burns Avenue Bridge, Benhall. Purple Toothwort is parasitic on tree roots, Willows and Alder mainly. It was originally introduced into UK gardens in the late 1800’s, and is assumed to be spread by flood water. It is now quite widespread in southern and central England, but is no where particularly common. 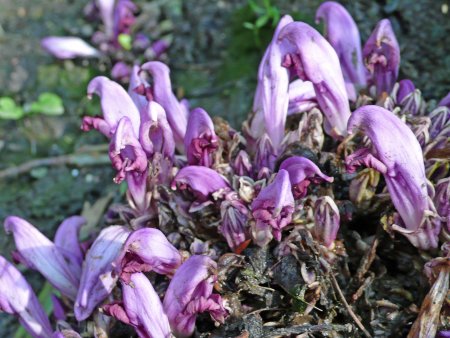